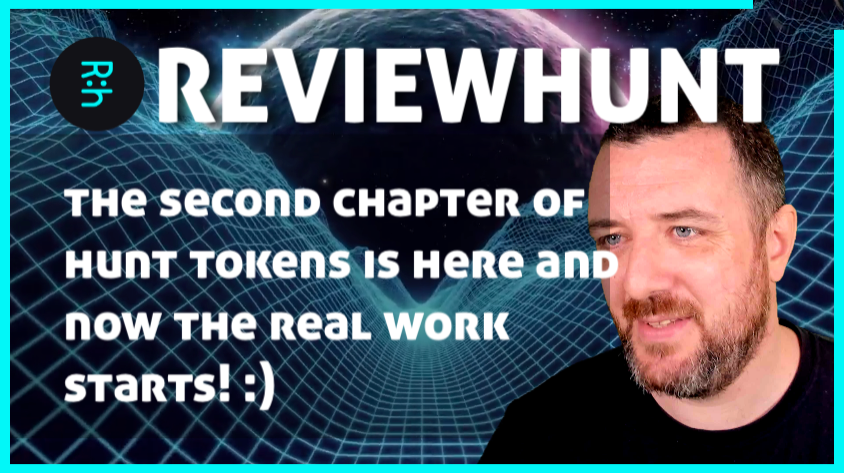 As promised and with a fast quick flick of the wrist the mega duo squad of tabris and project7 have put up a pre-release version of reviewhunt over at review.hunt.town and if you missed the original HUNT train at the steemhunt station you’ve still got time to get on this train and head forward into phase two with us!

The whole reason that i got into the steemhunt project well over a year ago now is all because of the HUNT marketplace for not only product makers but also reviewers — it’s not that brand advocacy is broken because for the people at the top of the YouTube tree with millions of followers they have been doing quite well out of it (thank you very much kinda thing!)

check out the announcement this morning as well here — https://steemit.com/reviewhunt/@steemhunt/introducing-reviewhunt-a-launching-hub-for-makers-pre-sign-up-is-live

But it’s not decentralized, it’s a centralized group of people on one platform often and most of the top advocates have a direct contact with a strategic partner at brands they like.

With reviewhunt we potentially (ok, we will) put everything we can into reaching a global audience of brand advocates no matter of their current reach or audience —- for me it’s about providing a brand, product maker or event with a way of getting social content for their newly launched products and services.

One of the biggest issues I’ve seen with ‘getting the start’ with a brand is often down to the timely release of payment for the video review, when your cross borders, across the world, dealing with different banking processes and such like that can be extended way past the usual speeds you would expect for those things to be resolved.


With crypto, especially with a erc-20 token like HUNT you can send those incredibly quickly, often within 30 seconds on the ethereum network (it would have been a steem SMT but it’s just not finished/started?) so instead the team just went ahead and deployed erc-20 instead (reminds me we need to get that listed on exodus wallet!)

So, what’s the reviewhunt website gonna do for you? Well, once you signup in the pre-release you’ll be asked to add all your social media accounts, it’s these that makers of products are going to see first when they visit the site and see the ‘reach’ of potentially putting a HUNT token based campaign — the maker can reach a number of advocates with the payment being received in HUNT.

Obviously this keeps the HUNT token active as makers will need to acquire tokens, purchase them from coingecko or daybit to fund their projects for reviewers to get paid in the tokens, even the reviewers could have their own products reviewed too if they decided to make their own products — pretty damn neat huh?

And don’t forget this is only stage two of a three step roadmap to come, next after this has launched will be ideahunt for people wanting to crowdfund (similar to kickstarter and even our fundition.io on the steem blockchain) to actually build out a product, that for me is a really powerful offering!

Think about that for a moment, from idea to product, to reviewers and then to hunt the end product on steemhunt itself — that’s an end to end platform for products across the whole lifecycle and we can do so much with that all that data.

mashups, remixes, hackdays even doing themed events around environmentally sustainable production and building products that are handmade with legacy and consideration of their dust to dust ratio on planet earth — the scope of the HUNT token is massive! :)

It’s time for you to get onboard the HUNT token train! :)